Contested races spur greater than average turnout in some areas

Unofficial April 4, 2017 Consolidated Election township and precinct-level results for suburban Cook County can now be viewed online at cookcountyclerk.com via either this webpage or this PDF summary.

The interactive page allows greater flexibility to zoom in on precincts and other levels of analysis in a contest.  However, it doesn't show write-in candidates, who have a real chance at victory in some local races.  The PDF summary does include write-ins.

The interactive page also includes a feature that can create an Excel document with precinct and township data by contest.

Unofficial results include all precinct totals, all early voting and all mail ballots received through Election Day. Additional updated election results will be posted this evening.

There were a number of close races throughout suburban Cook County, Cook County Clerk David Orr pointed out. “As I’ve stressed throughout this election season, local elections matter, as the decisions made by local elected officials impact our lives every day,” Orr said. “We’ve seen now in many contests, especially where just a handful of votes separate winning and losing candidates, every vote matters.”

There were 12 races or ballot questions, according to unofficial results as of Friday morning, where the winning and losing candidates were separated by 10 or fewer votes. Some of the closest ones include:

Trustee, Village of Barrington Hills, where in a ‘Vote for 3’ contest the candidate in third place as of Friday morning, Robert M. Zubak, had 238 votes, while the candidate in fourth place, Paula Jacobsen, had 235 votes; School District 113A, Lemont-Bromberek Combined, where in a ‘Vote for 3’ contest as of Friday morning Bethany Martino had 1,766 votes to Brian Bushnell’s 1,765; and in a ‘Vote for 4’ race in Brookfield-La Grange Park District 95, three votes separated third-place candidate Scott E. Encher (1,369) and Brian Pencak (1,366).

Mail ballots are eligible to be counted if they are postmarked by April 4 and received by April 18, according to state statute. Provisional ballots must also be validated and counted.

A canvas of write-in votes will begin on Tuesday, April 11.

Based on unofficial results, suburban Cook County turnout was about 17.4 percent, which was higher than the 2015 and 2011 Consolidated Elections (14.2% and 16.7% respectively), but lower than the 2013 Consolidated Election (18.9% turnout). However, in the 47 municipalities with contested mayoral or village president races, turnout averaged 27 percent – 15 of those municipalities had turnout over 30 percent; 10 had turnout higher than 34 percent.

*Based on unofficial results. The number of ballots cast and turnout percentage could increase as remaining mail ballots and provisional ballots are counted.

The Clerk’s office tracked voter turnout, and voter turnout by voter age, throughout the day Tuesday. The following two charts show the number of voters who went to the polls, hour-by-hour, on Election Day, and the voting habits, by hour and age group throughout the day. The second chart shows, for instance, that voting by Cook County’s oldest residents peaked in late morning, while most other age groups’ voting got off to a fast start, leveled off through the morning and early afternoon, then picked up again in late afternoon. 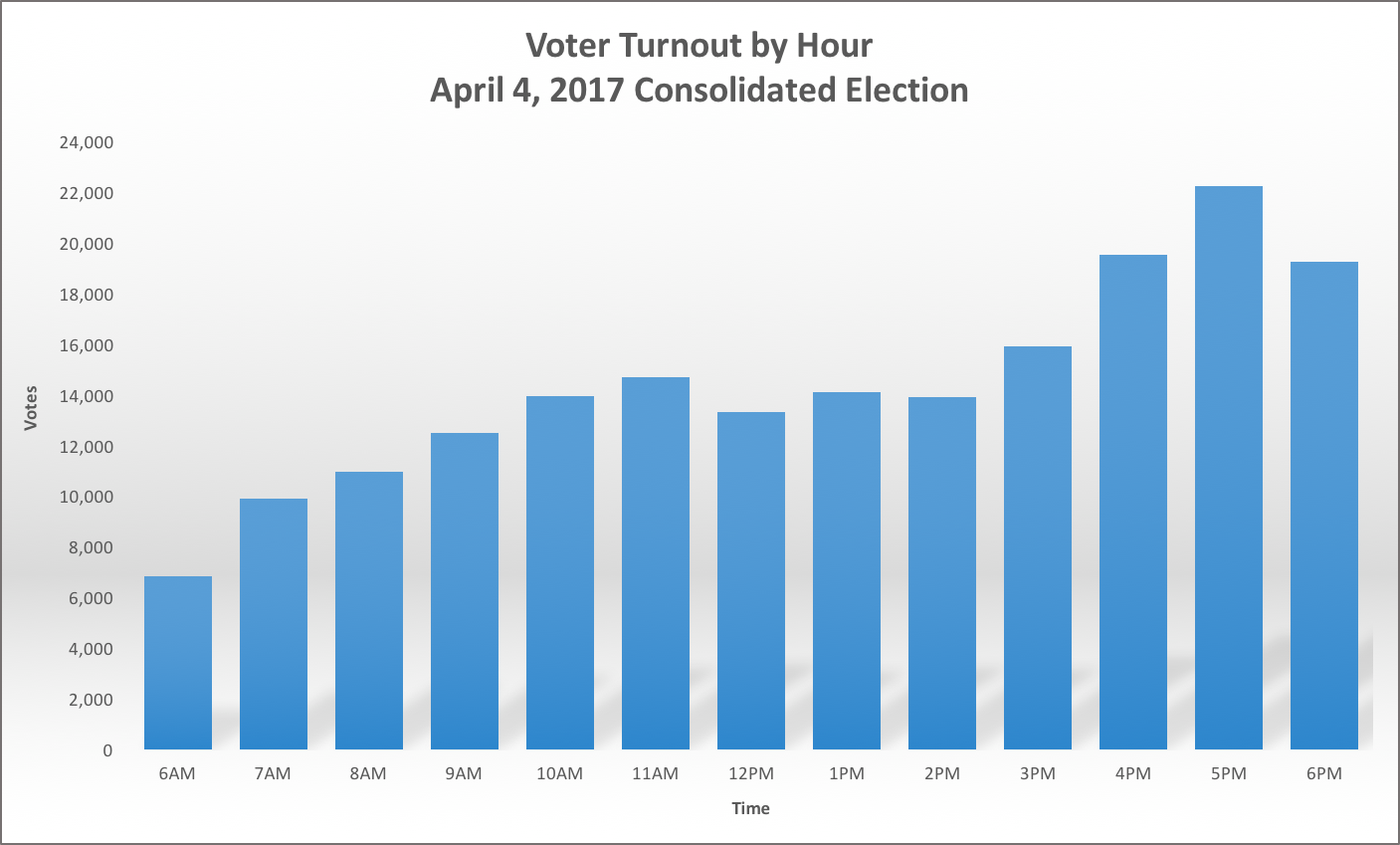 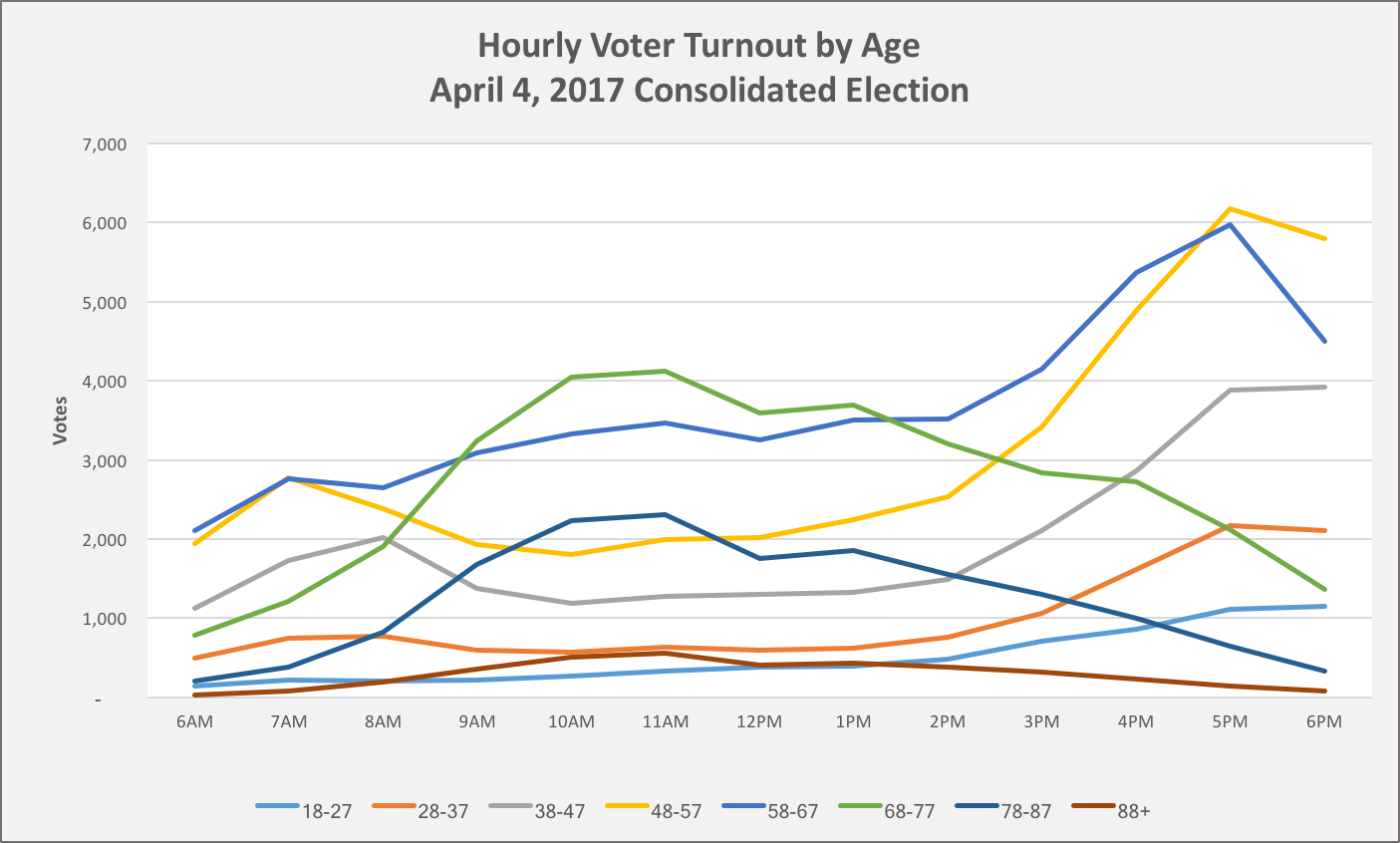 All of the highlights are based on unofficial results. The Clerk's office has 21 days to certify the results. Results will be updated periodically as provisional and mail ballots are processed.